The pyrolysis in Pellets Heater 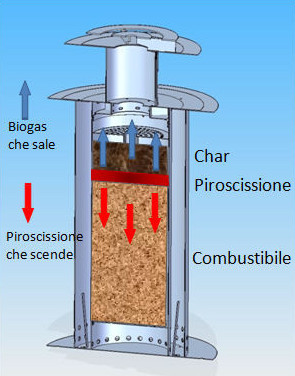 Pyrolysis, as is commonly heard by now, is a particular thermochemical process that occurs in the absence of oxidizing agents (in our case oxygen); in the process the thermochemical decomposition of the organic materials present takes place.

The pyrolysis of wood is activated by providing heat to the material to be decomposed, so as to provide the force necessary to break some chemical bonds within the complex molecules, wood in our case, but it is true for all biomass and make them less complex molecules.

Dissociation could be defined as the process, but it would be reductive in order to describe the set of reactions that occur during the complex process of pyrolysis, they are actually a continuous series of associations and dissociations.

The pyrolysis of wood has always been used, an example for all are the pyres for the production of charcoal, in fact in the charcoal pit a percentage of oxygen is present but in such low percentages as not to allow a traditional combustion. In more recent times, pyrolysis has found application in waste-to-energy plants suitable for waste treatment, the merits and defects of this solution have not always been brought to the attention of the population, at least not as much as it should have been.

Pyrolysis in plants, whether it is a home stove or a waste-to-energy plant, are born with the same operating concept.

The process, as we have seen, takes place through chemical dissociations and re-associations that allow us to fragment a complex molecule into many simpler parts through the application of suitable thermal conditions.

The resultant of the process is the production of two distinct products:
A volatile part divided in turn into:

A gaseous portion called pyrolysis gas or syn gas (synthesis gas)
A liquid portion due to the condensation of the volatile fractions of the fuel (water, creosote, etc.)
And a solid part of it is commonly referred to as char, char is made up of carbon residues of organic matter, ashes, metals, aggregates, etc.

The gaseous portion is composed of:

The pyrolytic stove not only uses the heat generated by the combustion of wood (biomass) but also and above all uses the heat generated and released by the gases emitted by the biomass during combustion (complicated ??? not as it may seem) We have seen before that during the pyrolysis biomass emits gases, in a traditional combustion stove only one third of these gases are burned, the other two thirds are released into the atmosphere. On the contrary, the pyrolytic stove burns all the gases present.

The legitimate doubt arises that the construction of a pyrolytic stove is rather complex and expensive, nothing could be more wrong.

The structure of a pyrolytic stove is simple and requires only ventilation at the base of the same, which must be well calibrated and related. Fundamental for the pyrolytic operation is that the biomass container is in exclusive use so as to avoid contact between biomass and oxygen.

To activate the pyrolysis of biomasses it will have to be ignited from above with the increase of heat and the absence of oxygen will start the formation of gases, the biomasses will stop burning while the bio gas emitted by them will continue to burn producing heat in large quantities , at the end of the combustion all the gases will be consumed and only the char will remain of the biomass. The latter in a perspective of total use can be used as a fertilizer.

The efficiency of a pyrolytic stove can reach 90% and its gases are colorless and odorless.

The indoor pyrolytic stove has a 230% higher efficiency compared to a traditional stove, despite this, either because of its scarce diffusion, or because of the little information, it is a product that is still not very widespread and technologically not developed as it should.

PELLET HEATER MADE IN ITALY – 100% GREEN 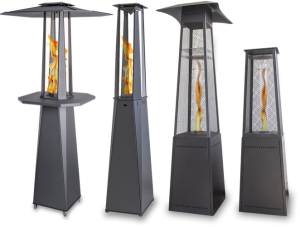